The painter Olja Ivanjicki was special – she was the only woman among the founders of MEDIALA Belgrade, an art group of painters, writers and architects. This room named after her will give you the privacy you need and the comfort you will enjoy in.

The room has one bed for one person only (1) and one bathroom. 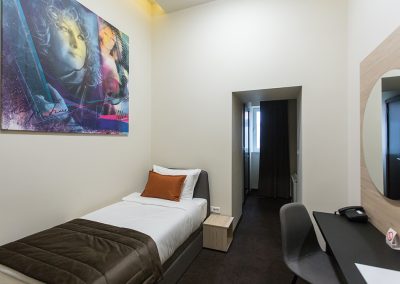 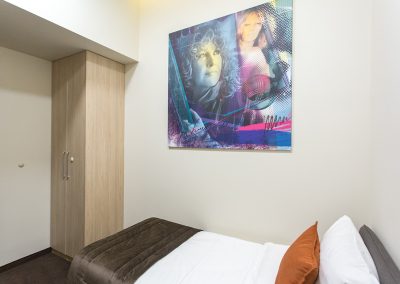 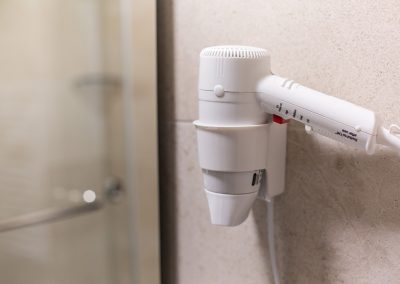 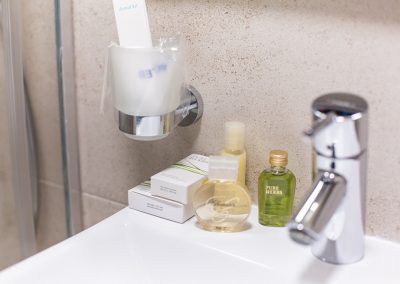 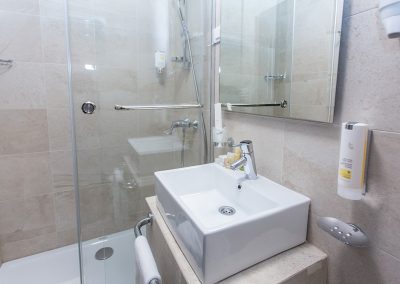 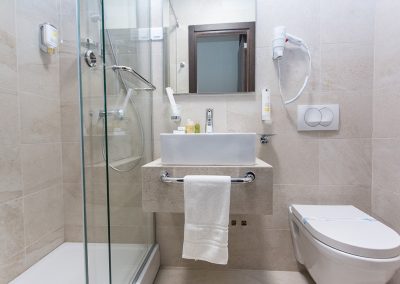 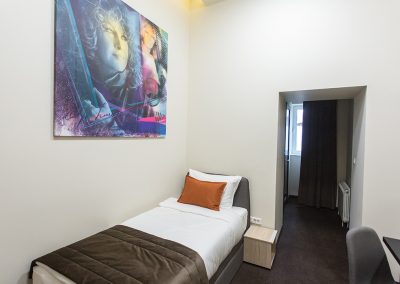 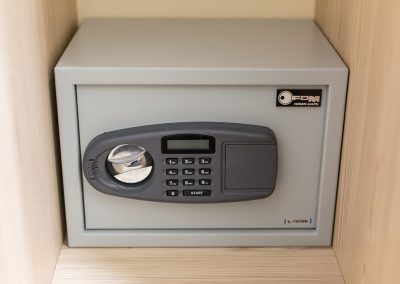 Olga Olja Ivanjicki was born in Pančevo in 1931, as the daughter of Russian emigrants and was an artist by whom the world recognized us. She studied sculpture at the Academy of Arts, although she was predominantly interested in painting.

She had always been ahead of her time. Even as a child she differed from her peers. She was interested in painting, sculpting, poetry and multimedia art. Always charismatic and sophisticated, in love with philosophy and religion, Olja gave herself and her soul, in a specific and unique way, to art, and art to others. She was the only female member of the famous artistic group Mediala. Mediala was founded in 1957 by young painters, writers, philosophers, architects, and composers. All members of the Mediala shared a common idea – an endless love for art and an infinite belief in its overall powers.

In the 1960s, in the rooms of the Graphic Collective, the audience and journalists gathered at the exhibition of young artist Olja Ivanjicki. They were surrounded by sealed suitcases that she filled with everyday objects. Belgrade was not ready for such art, but she nevertheless felt that she was on the right track and firmly decided to present pop art and performance on the sensitive socialist scene of the then Yugoslavia. She first encountered art performance while studying in New York with the help of the Ford Foundation. She was brave enough to step into one of the suitcases on display and light a life-size doll, which she presented as her double.

Olja Ivanjicki was a world-renowned artist because her art offered something more. She had 99 solo exhibitions in the country and abroad and after decades of work, left behind more than 20,000 paintings. Some of them are kept in prestigious museums, such as the Metropolitan Museum of Art in New York, while others are adorning private collections of the Kissinger, Rockefeller, Sophie Loren families. However, Olja could never give up some of her works, believing they make up an indispensable part of the fund carrying her name and that they represent Serbia’s cultural heritage.

She kept an incredible number of personal and artistic objects in her thirty-eight square meter apartment on Kosančić wreath, with over 700 paintings and 1,100 books. In her lifetime, Olja Ivanjicki had only one solo exhibition in her native Pančevo and was eternally connected to this city as the creator of the monument of Stevan Šupljikac, a monumental piece made out of bronze, 2.7 meters high, which was erected and revealed in 2002 on the square in front of City Hospital.